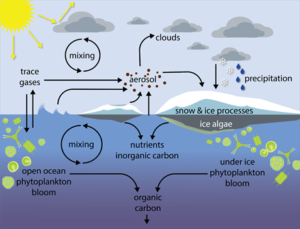 Simplified schematic representing the coupled processes in the ocean – sea-ice – snow – atmosphere (O-SI-S-A) system that will be addressed in this working group. This schematic representation is not intended to include detailed processes required for a representative conceptual model, but rather emphasizes the need for connection between atmospheric and polar ocean components